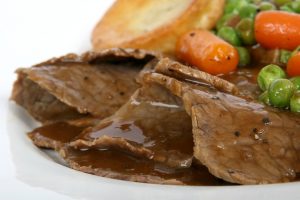 Remove from the refrigerator, at least ½ hour before preparing for cooking, a rib roast of beef.  Wash it with a damp cloth.  Trim off the excess fat and hard edges.  Season the roast with salt and pepper.  Its surface may be rubbed with a cut clove of garlic and it may be dredged with flour.  Place the roast fat side up in a pan in an oven preheated to 300 degrees.  If the roast is very lean, tie or skewer over it a piece of suet or salt pork.  Cook as directed below:

A rolled roast will require 5-10 minutes longer to the pound.  Note that roast may be browned in a hot oven 500 degrees for 20 minutes before being cooked, uncovered and without basting.  If you wish to brown a roast after it is done, place it under a broiler for a few minutes.  Use the fat and drippings in the pan for making gravy.

“This is our family’s traditional holiday meal, got up in the old English tradition – roast beef and Yorkshire pudding.”
Contributed by Mary T. Clarke

The following recipe will produce 1 cupful of gravy: Remove the meat from the pan.  Place it where it will remain hot.  Pour off all but 2 tablespoons of the drippings.   Blend into them 1 or 2 tablespoons of flour, stirring with a wire whisk.  Add slowly until the gravy has the right consistency, cooking it slowly and stirring it constantly, about 1 cupful of hot milk or hot water and cream.  Season the gravy with salt, pepper, minced herbs, grated lemon rind, etc.  Strain the gravy, reheat it and serve it.

Sift the flour and salt in a bowl.  Make a well in the center into which the milk is poured.  Stir in the milk.  Beat the eggs until fluffy and add them into the batter.  Add water.  Beat the batter well until large bubbles rise to the surface.  Permit this to stand for 1 hour, then beat it again.

Have ready a hot oven-proof dish (about 10×10) containing about ¼ inch of hot beef drippings or melted butter.  Pour in the batter.  It should be about ⅜ inch high.  Bake the pudding in a hot 400-degree oven for about 20 minutes.  Reduce the heat to 350 degrees and bake it 10-15 minutes longer.

The pudding may be baked in hot muffin tins.  “It was customary to cook this old and delicious dish in the pan with the roast or under the roast, letting the drippings fall upon it.  As we now cook roast beef in a slow oven we must revise the cooking of Yorkshire pudding.  It is best to cook it separately in the hot oven it requires to puff it up and brown it quickly.”

“Place the batter in a hot pan containing hot fat or drippings.  Cook it as directed and you will have a dish not unlike a popover.  Serve it from the dish in which it was cooked, cut into squares.  Substitute the pudding for the usual starch served with a main course – potatoes, rice, spaghetti, etc.”