Both artists will also be exhibiting a select number of photographs they recently have taken of Hyde Hall. A portion of all proceeds from the sale of the artists’ photographs will be donated to the Friends of Hyde Hall to maintain the facility and its community programming. 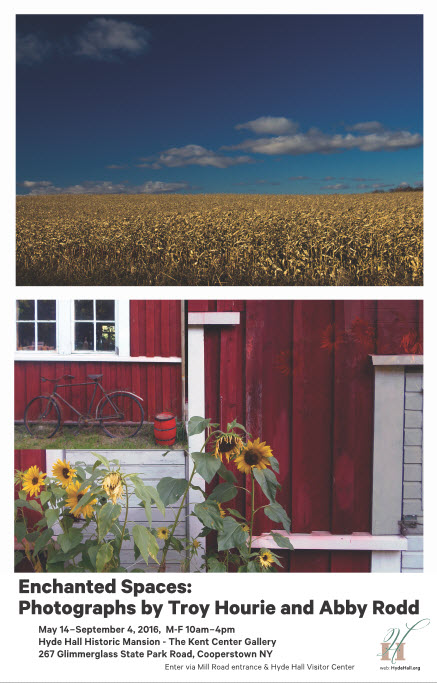 A Cooperstown resident since the age of 12, Abby Rodd first joined The Glimmerglass Festival in the summer of 1992 as a stage crew intern. An alumna of State University of New York at Oswego, she returned to Glimmerglass seasonally in several capacities, working her way up to the position of technical director in 2001 and Director of Production in 2008. This is her 25th season with the company.  When she isn’t backstage at The Glimmerglass Festival, she can be found with her camera, capturing the vast beauty discovered in the rolling landscapes of Otsego County.

Troy Hourie is an installation artist and scenographer. Many Cooperstown enthusiasts will recall his artwork, “Enchanted Space: The Wisdom Tree”. It was a large scale landscape assemblage installation based on Native American storytelling and was exhibited this past summer on the front lawn of the Glimmerglass Festival. He also recently designed The Magic Flute and Ariadne In Naxos for the festival. The photographs in the exhibition document evocative spaces he discovered on his travels during artist residencies in Oswego County, Portugal and Finland. www.troyhourie.com