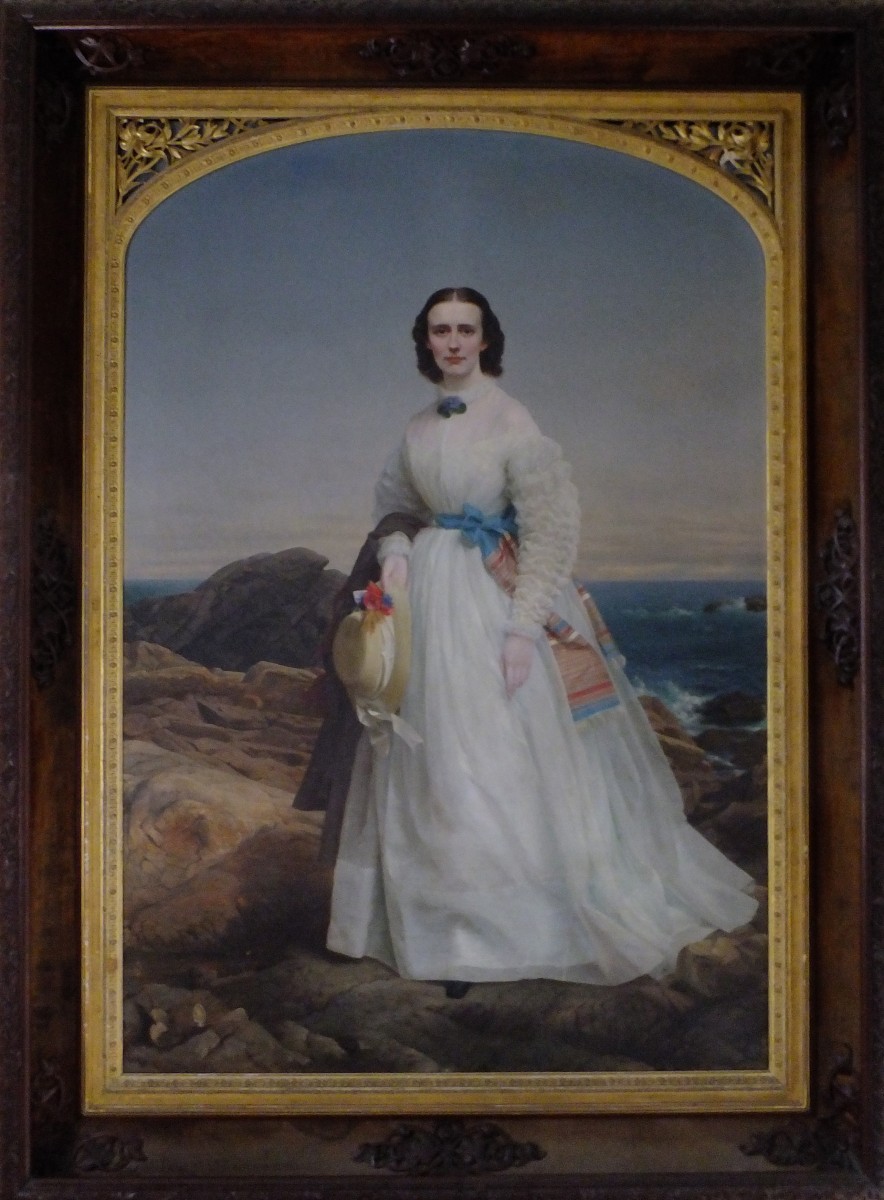 The magnificent full-length portrait of Jane Storrs Cooper Worthington (1843-63) was commissioned by her husband, John Worthington, in 1865.   Painted by German artist Carl Ludwig Brandt, the portrait shows “Jenny” standing on the rocks at Newport, Rhode Island with the sea roaring behind her.    Its large scale (102” tall X 76” wide) is appropriate for display in the kind of huge space such as one finds in the drawing room or dining room at Hyde Hall.  We are very pleased to accept this portrait on loan from the Cooper Family. Jane Storrs Cooper Worthington was the grand-daughter of Ann Low Cary Cooper Clarke (1783-1850), whose husband, George Clarke, built Hyde Hall. 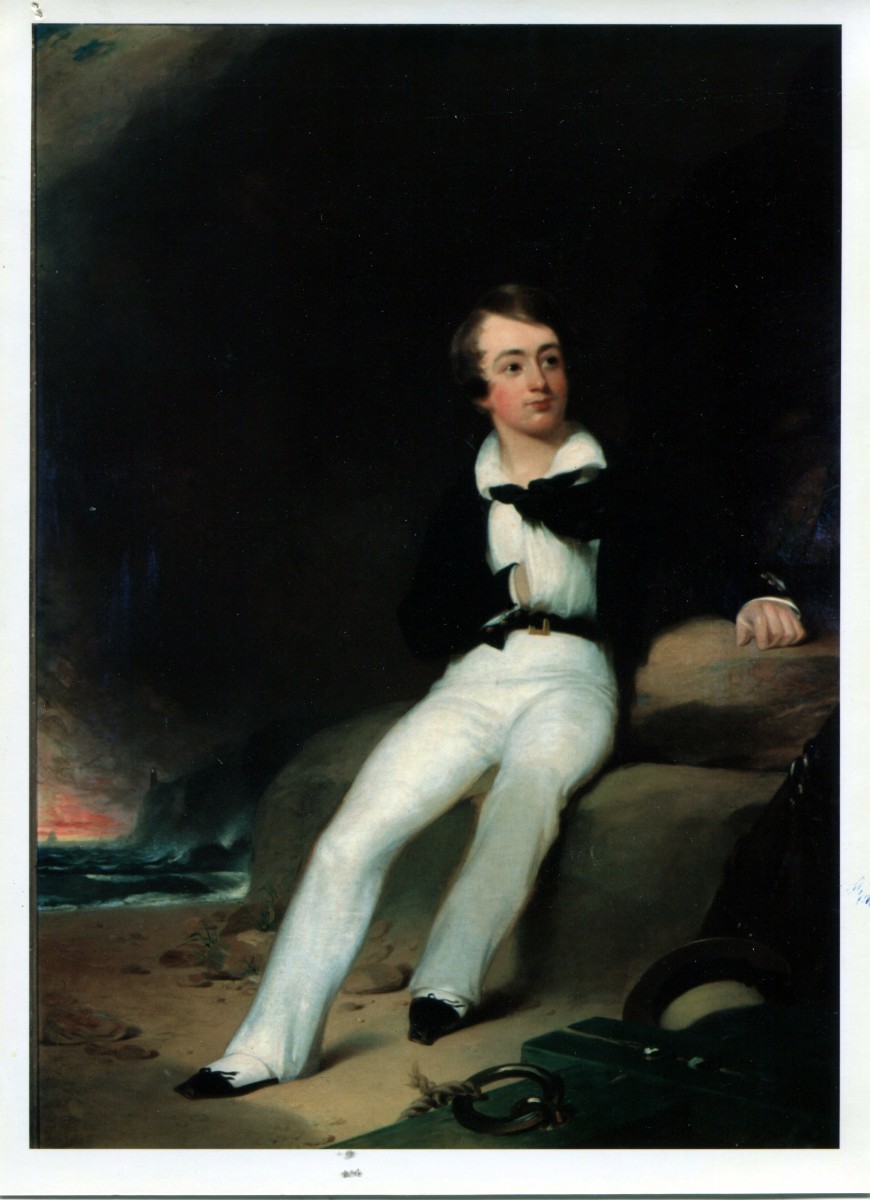 Detail from a Portrait of George Clarke, (1822-1889)
This portrait is contained in a rectangular gilt frame;  subject of portrait is a young man in sailor outfit.

In a letter dated 1839 he talks of posing for the picture and asks his mother to bring his patent leather belt and straw hat the next time she comes to New York since he will need them for the portrait.

Commissioned in 1835 from the artist Charles Cromwell Ingham, this portrait of Hyde Hall’s first chatelaine, Ann Low Cary Cooper Clarke (circa 1780 – 1850), is an idealized image of her as a young woman, arguably around the time she married George the Builder in 1814. (It belongs to the Fenimore Art Museum in Cooperstown.)

Daughter of one of George Washington’s aides and once described as “beautiful and reckless,” Ann married, in 1801, Richard Fenimore Cooper, an elder brother of the famous novelist; he died in 1813 when she was pregnant with their fifth child. Or was she? Gossips certainly believed Alfred Cooper Clarke, as that child was known, was actually the son of George Clarke of Hyde Hall, whom Ann married about a year after Alfred’s birth.

As Wayne Franklin, a biographer of James Fenimore Cooper has written, “Ann was carrying on more-or-less openly” with George Clarke during the final years of her first marriage. Clarke was married too, with a wife back in England, Elizabeth “Eliza” Rochfort (ca. 1768 – 1861), an Irish beauty whose mental condition had deteriorated profoundly by 1818. No divorce documents have ever been found dissolving the marriage of Eliza and George, and even George’s father back in England referred to her as his son’s wife and treated her accordingly.

As letters in the Clarke family papers at Cornell University attest, George Clarke’s children by Eliza Rochfort considered their American half-siblings to be illegitimate interlopers.

In the outer library at Hyde Hall hangs a portrait of a man whose identity was unknown to us until recently.   Thanks to investigations from: Hyde Hall Site Manager, Randy Lamb; Board Chairman Gib Vincent; and Hyde Hall Trustee, Douglas Kent (who donated the Hyde Hall portrait), it seems that the man has been confirmed to be King Victor Amadeus III, 1726-1796.  Along with visual similarities of the subject, careful comparisons of epaulets, medallion, belt, baton with crosses, armor details and cuffs were made to ascertain the identity.

The HH portrait would be described as “a period copy after the original by Giorgio Domenico Dupra “.  Such copies of important political and military figures were created either to sell or give to various people.  The original is dated 1755 to 58, and ours looks to be roughly the same date from the age and weave of the canvas. The portrait that resides at Ickworth is also a copy; and the original seems to belong to the Duke of Hamilton.

Country houses were full of portraits and there is a list of paintings at the English Hyde Hall that includes some English monarchs and a Dutch portrait.

Vittorio Amedeo III of Savoy was the son of Charles Emmanuel III (whose portrait is also at Ickworth) and his second wife, Polyxena of Hesse-Rheinfels-Rottenburg. He succeeded to the throne of Sardinia after the death of his father in 1773, and married the Infanta Maria Antonia (see her portrait also at Ickworth). His three sons reigned after him: Charles Emmanuel IV (1796-1802); Victor Emmanuel I (1802-1821); and Charles Felix (1821). The portrait is painted in a ponderously careful manner and must be by a copyist. Duprà’s style, to judge by the painting belonging to the Duke of Hamilton, was smooth and highly finished. It seems likely that the original portrait of Victor Amadeus belongs to about the time of his marriage in 1750, when Duprà is known to be at the court at Turin. This painting was almost certainly acquired by George William Hervey, 2nd Earl of Bristol (1721-1775) when envoy at Turin, 1755-58.

Ickworth House is a country house near Bury St. Edmunds, Suffolk, England. It is a neoclassical building set in parkland. The house is in the care of the National Trust.  Ickworth house was built between 1795 and 1829, was formerly the chief dwelling of an estate owned by the Hervey family, later Marquesses of Bristol, since 1467. The building was the creation of Frederick Hervey, 4th Earl of Bristol and Bishop of Derry who commissioned the Italian architect Asprucci to design him a classical villa in the Suffolk countryside.