“Many of the letters in our archives were received and preserved by Mary Gale (Carter) Clarke, who lived from 1862 to 1929. She corresponded frequently with numerous relatives, including her mother, Jane Russell (Averell) Carter, her husband, George Hyde Clarke (b.1858). her sisters, Anna Grace Carter and Jane R.A. Brown, and her children, George Hyde Clarke (b.1889). Averell Carter Clarke, Alfred Hyde Clarke, and especially Anne Hyde (Clarke) Choate. She also corresponded with her school friends, Abby Lippitt, Daisy Gordon (Juliette Gordon Low), and Eleanor Gordon Parker (Daisy’s sister), and her teacher and confidante, Sister Virginia, an Episcopalian nun. It was she who presented the correspondence between her mother and father while they were courting, as well as her husband’s correspondence with his mother and father, and with his friends.”

The documentation about Hyde Hall and the Clarke family is an incredibly valuable resource for our work at Hyde Hall.  It guides our restoration efforts and allows us to provide historically accurate information.  Additionally, we are fortunate to have input from Clarke family members to help guide our interpretation of materials along with first hand insights. 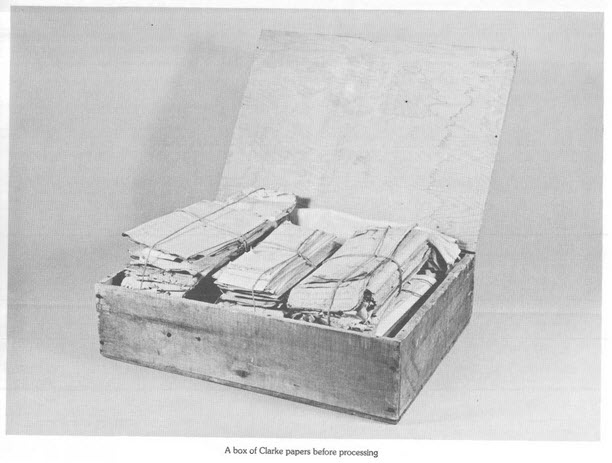 “. . . I desire and direct that all titles, deeds, maps, charts, contracts, leases, writings, memorandums whatsoever relating to my estates in the United States of America be kept together in a safe and appropriate manner at my said mansion house of Hyde Hall, but so that any person or persons interested therein may upon reasonable request have access thereto for the purpose of inspecting examining or copying the same or any part thereof if it be necessary or suitable or convenient for them so to do.”

His children carried out his intent; they preserved not only their forebear’s papers, but also their own. Although it is of course impossible to reconstruct totally the original extent of the papers and to note which documents were preserved and which were destroyed, the breadth and depth of documentation of many aspects of the life of the family is remarkable for a collection of this age and extent. “