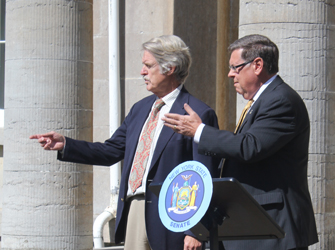 September 6, 2013 – Senator Seward helps historic Hyde Hall face future
“Hyde Hall is a living, breathing piece of Otsego County’s rich history.  This project will enhance the site and ensure that George Clarke’s story will continue to be told for generations to come” State Senator James L. Seward (R/C/I-Oneonta), website
May 13, 2013 – Families honor moms in style at Hyde Hall
Mother’s Day was celebrated at historic Hyde Hall on Saturday with dozens of families treating their mothers to high tea at the historic mansion. The Mother’s Day Tea at Hyde Hall has been held annually for more than 20 years. By Cathy B. Koplen, The Daily Star[We are looking forward to The Mother’s Day Tea at Hyde Hall in May 2014]
May 7, 2012 – New Tin Top Bridge at Hyde Hall
Though the 1820s design was built entirely of wood, the new Tin Top Bridge is made of steel with wood planking and sides. The project also included the installation of a 20-car parking lot for Hyde Hall visitors, just north of the Tin Top gatehouse. Mark Simonson, The Daily StarApril 2,
August 20, 2011 – Decades of preservation, restoration involved in Hyde Hall
“Every now and then I like to pass by some of the places I’ve lived in during my adult years …sometimes what I come upon is pretty alarming or disgusting, and I wonder how a property could be allowed to become so run down. George Hyde Clarke wouldn’t feel this way at all about one of his former places of residence. Anyone who has lately seen Hyde Hall…might believe Mr. Clarke would be wearing a smile.” Mark Simonson, The Daily Star

January 6, 2011 – Famous Painting at Hyde Hall
“An icon” in American painting may soon be represented at Hyde Hall, where Samuel F.B. Morse’s original “Gallery of the Louvre” hung for 15 years in the mid-19th century. Jim Kevlin; The Freeman’s Journal

December 11, 2009 – History, holidays alive at Hall
“I remember living there, how it was cold in the winter when you woke up in bed,” said Ann Logan.” I remember running on the roof, with a governess yelling at me, `Get off that darned roof!'” Tom Grace, The Daily Star

Aug 13, 1989 – Architectural Firm Devises Plan To Restore 40-room Hyde Hall
It (Hyde Hall) is the most important surviving Regency House in New York, and one of a handful in America,” said Roger G. Kennedy the director of the National Museum of American History, part of the Smithsonian Institution in Washington. Observer-Reporter

Aug 11, 1989 – Visit Hyde Hall
The mansion itself, an 1817 English manor house, offers little charm on the outside but does become more appealing as one walks through. There are some 50 rooms…. in the stone structure, built in three stages. On the Way: Gail Shufelt and Bill Rice, Schenectady Gazette

July 22, 1965 – Friends of Hyde Hall Meet With State Parks Council
“The future of Hyde Hall, one of America’s great houses, is in the balance. Acquired by New York State in 1963 along with property for Glimmerglass State Park, Hyde Hall may be torn down as a liability hazard on park land – unless the state, or Friends of Hyde Hall Inc. a non profit organization can find some way of preserving this distinguished landmark” The Otsego Farmer, Cooperstown

June 6, 1963 – State Acquires Estate for New Park Site
“The State of New York last week too formal possession of 600 acres of the George Hyde Clarke estate on Otsego Lake, according to Howard C. Stowell of Jamesville general manager of the Central New York State Parks Commission. The site, which includes historic Hyde Hall, will eventually be developed into a state park…..Present plans call for preservation of Hyde Hall and its environs. A well preserved bridge is included in the property. The Otsego Farmer, Cooperstown